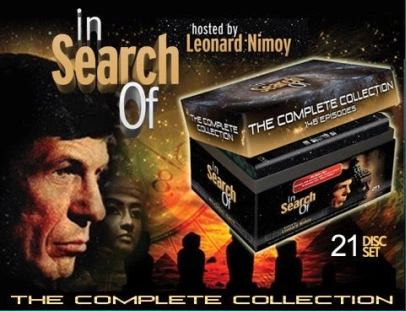 Although I have followed the UFO Phenomenon since 1977, I normally only write fiction. However, following the incredible series of stories and videos that have come out since 2017, a number of my readers, friends, and family have asked me what I think is going on. As a result, I wrote this series of posts hoping to clarify where we have been, where we are now, and where me may be going. I call it…

The Arc of Disclosure.

Part 1: The Beginning of the Phenomenon (for me)

The date was July 13th, 1977, nearly eight years to the day since Apollo 11 landed on the moon (if you believe in that sort of thing, which I do, btw) and the alternative science/paranormal American TV show “In Search Of”, which was nearing the end of its premiere season, was about to run their first full episode on UFOs. The subject had been touched on in an earlier episode about the Nazca lines in Peru called “Ancient Aviators”, although that one mostly focused on the idea of pre ‘Wright Brothers’ human flight.

UFOs came up again that first season in episodes about Mars, Atlantis, and one titled “A Call from Space” that discussed trying to contact aliens SETI style. But it wasn’t until this installment, the 21st in a 24 episode run, and one simply titled “UFOs”, that the producers dedicated an entire hour to covering the subject exclusively. And let me tell you, it was glorious.

Having just turned 8 years old barely two weeks earlier, and still a couple of weeks away from seeing the original Star Wars in the theater, (the first of what would end up being six times that summer, not a small accomplishment for someone who had to convince his parents to drive him to the same movie over and over for like three months straight, if I don’t say so myself) the closest thing I had seen to a UFO was an old black and white episode of Lost in Space.

Close Encounters of the Third Kind had also been released that year, but my parents weren’t interested, so I didn’t see it until it was on TV a couple of years later. (Yes, in the mid-20th century, before VHS and DVDs, much less streaming or On Demand, if you missed a movie in the theater, then it could be years before you had another chance to see it. Literally years. Click on that last link if you don’t believe me. It will blow your mind.)

While I’m not sure the narrative structure, moody music and dated production style would hold up today, for someone my age the UFO episode was nothing short of a revelation. I mean, I knew what Star Trek was, but I didn’t know that it was Leonard Nimoy’s voice adding such gravitas to the images and discussions on screen. His descriptions of the UFO phenomena were heavy and potent, and some of the witnesses shown seemed shockingly believable.

After that day, as far as I was concerned, UFO were real, and this TV show had just blown the lid off of the whole damn thing. Whatever disclosure was to an 8 year old me, I was sure that it was going to happen. The horse was out of the barn. UFOs were real, and now that it was on TV for EVERYONE to see, it seemed without question that any day President Carter would declare it all true. Aliens exist, and they are visiting us. And, oh yeah, by the way, anyone wanna see the ship and bodies we found?

How wrong I was.

Over the next twenty plus years, to my memory anyway, the subject seemed to return to the place it was before I was born, a post ‘Project Blue Book’ world where all “legitimate”, “reasonable” people saw UFOs as flights of fancy for bored, overly imaginative story tellers. Or run of the mill nut jobs. The ‘tin-foil’ hat crowd, if you will.

Still, by the time the 80’s started, and a ten year old me was finally able to buy the books I wanted to read. Suddenly freed from the bonds of the small handful of media outlets that existed at the time, I started my own hunt. Imagine how surprised I was to find a treasure trove of ‘alternative’ literature on the subject, dating all the way back to the late 1940’s.

From that point forward I sat in more than one library or book store, reading in stunned silence about things like Sign, Grudge, and ultimately Project Blue Book, all official, legitimately sanctioned investigations by the US government into the phenomena, and effectively crossing the bulk of the 1950’s and 1960’s. Regardless of their dubious (and later confirmed as intentionally dismissive) conclusions, these programs were undeniably real.

The further I dug, the more I learned. Solid, well-reasoned books went all the way back to the 50’s, including one by Edward J Ruppelt, a man who originally headed the Air Force’s program on UFOs in the early 50’s, and who supposedly even gave a quote to Life Magazine in 1952 endorsing the ET hypothesis. I read that book like ten times, then it disappeared. If the Men in Black have it, I want it back, margin notes and all. I paid the library late fees. It’s mine.

But wait, there was more.

-The guy who ran Blue Book, and someone who poo-poo’d the ET idea publicly, Dr. J. Allen Hynek, went on to write a bunch of pro-E.T hypothesis UFO books? Wait, what?

–The US Army reported they had a crashed UFO in 1947, a time when both of my parents were already alive, (sorry to rat you out mom) and it was in the Newspaper? Huh!?

-Since 1944 US pilots flying over Germany (and later the Pacific as well) reported glowing balls of light trailing them, and performing insane maneuvers? Yikes!

-Aliens may have been coming here in “Chariots of the Gods” for millennia?

How could all of this be happening for decades before I was born, or centuries, or even longer, and other than a fringe show like “In Search Of” that, while on network TV, was filled with episodes about The Loch Ness Monster (IMO, she’s a hoax), Bigfoot (He’s a bear, and a hoax), and the Bermuda Triangle, (Planes disappear in the ocean sometimes, sorry) among others, no one was even talking about it?

(Side Note: “In Search Of” did interesting ep’s on communicating with plants, NDEs, Acupuncture, Laugh Therapy, Coral Castle, The Dead Sea Scrolls, Cloning, The Siberian Fireball, The Dogon/Sirius mystery, Hypnosis, and many others, but it’s been 40 years since I’ve seen them, so I’m not sure if any hold up.)

(Note Two: They also did some additional episodes on UFO in later seasons, including one in Season 3 about abductions, one in season 4 called “UFO Australia”, an “Ancient Aliens” style episode later in season 4 called “Earth Visitors”, a season 5 premiere on UFO cover-ups, and one more that touched on the subject titled “Time and Space Travel”, before concluding the entire series in 1982. All in all, this show was the granddaddy for so much of the paranormal/alternative science/alternative archaeology stuff we see today, and was a definite mind blower when no other such info was anywhere else on TV. To my memory, I never missed one.)

In the late seventies and much of the 80’s, the closest thing to a mainstream, respected scientist who was regularly shown discussing the subject, was a brilliant, wonderful, magical and polarizing figure by the name of Stanton Friedman. Oh, Stanton my Stanton.

One of the titans on the field, Friedman was the best and worst of both worlds. For skeptics he was everything they complained about. He was loud, bombastic and way too sure of his conclusions regardless of a dearth of tangible evidence, and although his credentials were beyond reproach, his wild-eyed gaze, extreme facial hair and untrimmed eyebrows often had critics labeling him a fringe-type mad scientist. Imagine a 1970’s Giorgio Tsoukalos, but if he were human and not a DMT Alien.

For UFO optimists like myself, he was a legit, mainstream educated scientist with a Master’s Degree in nuclear physics, and someone whose resume included companies like Aerojet General Nucleonics, TRW, General Motors, and McDonnell Douglas (yep, read that last one right).

According to Wikipedia, by 1970 Friedman had left his mainstream career to try his hand at the UFO mystery, and to my recollection, unlike the more dispassionate scientist types of his era who were either outright critical or simply offered bemused smirks on the subject, he was not only beyond convinced of the ET hypothesis, but even went to his grave in 2019 declaring that the 1947 Roswell crash was a real incident, bodies, craft and all. I wonder what he would think about the Wilson/Davis notes. Wish you were here Stanton. You deserved to see this through to the end.

A note on the online UFO community engaging the Phenomenon.

Although I have been following this topic for decades, the last few years have seen an explosion of talented, dedicated, well intentioned folks covering the topic on a daily basis. I am sure there are many, many more podcasters, bloggers, reporters, researchers and content creators in this field that I have yet to learn about, but for now I would highly recommend the following.

If you liked this, Part 2 of the series is up now!

Thanks for reading. If you like what I wrote and want to support me, buy one of my books. “Whispers of Fate: Book One of the Heirloom Ores” is only 99 cents, and will launch you into an epic, seven book fantasy series. Books 2 and 3 are already out as well, and they’re cheap and awesome.

I am also finishing an action adventure, alternative history novel called “Monks of Alexandria” early next year, along with a sci-fi novel titled “Titan” that is marked for a 2021 release as well.

Plus, as mentioned, I have many upcoming UFO blog posts, including part two of this series, and another due any day on Raiders of the Lost Ark and The Big Bang Theory. Also, the one I wrote last month on Han Solo is fun too, if you’re bored.

Otherwise, if you want to know when the posts and books are out, or you have thoughts or questions on any topic, just go to plainfiction.com, or shoot me an email at plainfiction@gmail.com. If you’re a nerd, message me on Twitter @plain_fiction. I love nerds…and married one.

Now shut off the computer, and go to bed already. Sheesh.

Chris is the author of many books, articles, screenplays and a few tv shows.