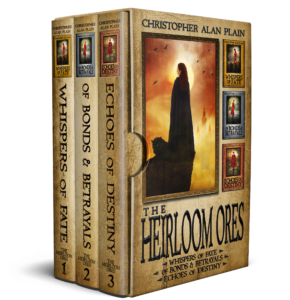 Designed as a seven-book series, the Heirloom Ores saga takes place in a world where magic itself is a religion, and where members of the different sects of that faith, the Ancient Faith, spend their lives praying for a great power to be bestowed upon them.

Beginning with the first novel “Whispers of Fate”, originally released in 2015, then followed by the 2018 release of the second volume “Of Bonds & Betrayals” (and the 2019 pending release of the third volume “Echoes of Destiny”) it is the continuing story of one woman’s struggle to master the power passed down to her by her mother, and the people who will stop at nothing to control that power for themselves.

From the very first page the reader is drawn into a world of assassins, magic, smugglers and thieves, before taking them on an adventure across all of the Known Lands, where the democratically ruled citizens of the Mainland and Westland live mostly in peace and prosperity.

Originally one land mass, the Mainland and the West are how separated by massive, roiling scar known as the Breach that formed hundreds of years in the past.

Drawing on the fast-paced action of adventure novels, the complex plot twists of mystery thrillers and the best elements of classical epic fantasy, the Heirloom Ores creates a detailed world full of characters who fill your heart and others that will chill your soul.

Do you have the faith?